At the JW3 Annual Chanukah Luncheon for Holocaust Survivors, we were told to expect an important guest but none of us could have anticipated that it was King Charles himself who graced us with his presence!  One moment we were finishing our meal and thinking of joining the dance when King Charles appeared and wound his way through the twenty or so guests.  He came up to Marianne and me, warmly shook our hands and chatted with us for a good five minutes.  He questioned how we had come to the UK and was surprised to learn how we arrived at Liverpool Street Station four days before the outbreak of World War Two with no luggage and just the clothes we were standing in.  He asked whether a family took us in, presumably thinking of what is now happening to refugees from Ukraine.  We explained that the only assistance we had was from World Jewish Relief who fortunately arranged hotel accommodation at a central London hotel and then continued to support us financially and generally for a number of years. 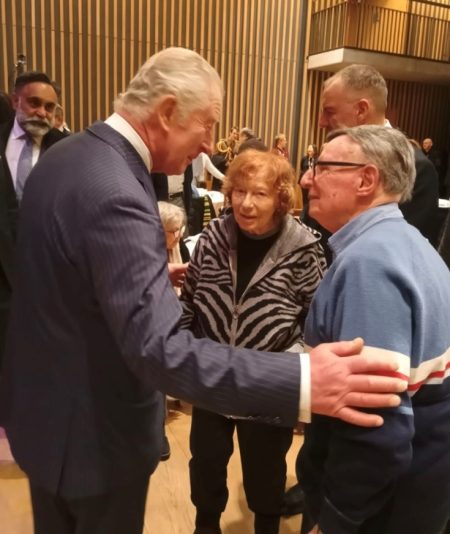 The chat was totally informal and it was like speaking to a friend.  He was clearly knowledgeable and interested and he had obviously spoken to other Holocaust Survivors in the past.  He enquired about the work we do for the Holocaust Educational Trust about which he was well informed.  We expressed our thanks to the UK for all the help and kindness we have been given throughout our lives.  For us, it was an unforgettable experience and the event gained a great deal of publicity in the media.