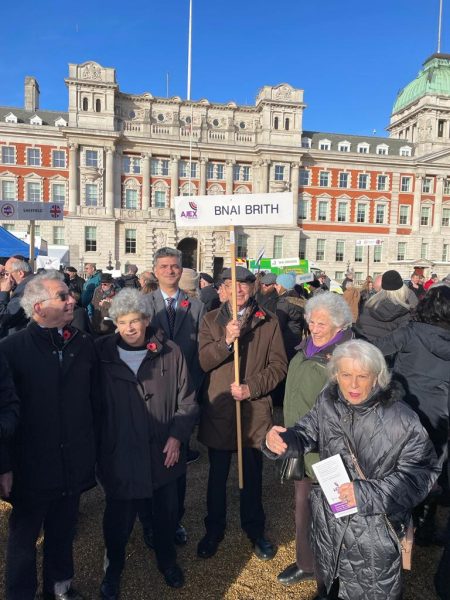 The largest ever contingent of B’nai B’rith UK members and their families, attended the ceremony at the Cenotaph in Whitehall on Sunday 20 November 2022.

This year the theme was “Connection”, to especially connect all generations and carry forward the Baton of Remembrance.

A number of B’nai B’rith members were selected by AJEX to have the honour of laying a wreath at the Cenotaph:

Marion Summerfield of First Unity Lodge, whose wreath was in honour of all the allied forces who served at El Alamein on the 80th anniversary (an uncle of hers was killed in the battle).

Jacques Weisser, a member of BB Radlett and a Vice President of AJEX, laid a wreath in memory of all Holocaust victims and victims of Nazi persecution, and other genocides.

Geoffrey Wolf, member of Shlomo Argov Unity Lodge and former AJEX National Treasurer, whose wreath was in memory of the Monash branch of the Royal British Legion who have served.

BBUK is extremely proud to have Ron Shelley MBE, of First Unity Lodge, who for many years has been the Parade Commander. His duty is to marshal representatives from across a myriad of Jewish organisations, not an easy task, into ‘battalions’ to line up in Horse Guards Parade for the march along Whitehall to the Cenotaph. The parade this year was led by the Band of the Irish Guards. 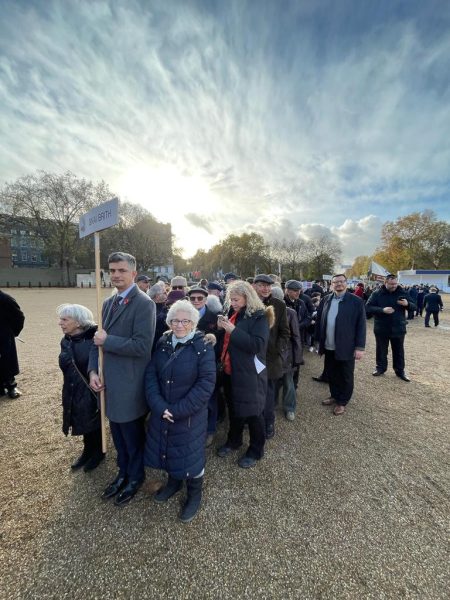 The prayers included The Loyal Prayer, Psalm 23, a prayer for the safety of the British Armed Forces, Isaiah 2:4, the Memorial Prayer and the Mourner’s Kaddish. Plus the Laurence Binyon poem, “They shall grow not old,….”.  The Last Post was sounded followed by a two minutes silence, the Kohima Epitaph and the Prayer for Peace. Adon Olam was sung to the accompaniment of the Band of the Irish Guards. The Benediction was then followed by the National Anthem. 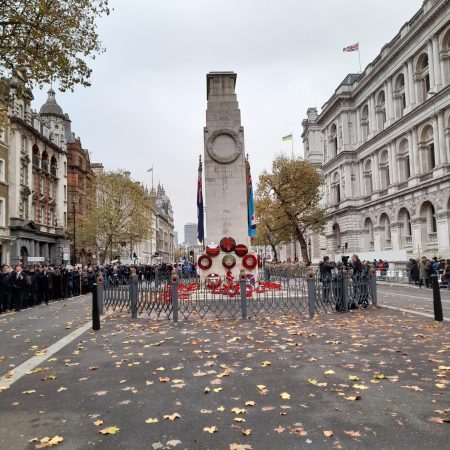 After the service of remembrance and wreath laying ceremony, the groups then ‘marched’ back to Horse Guards Parade for the Reviewing Officer, Major General Jon Swift OBE, as the Colonel of the Regiment of the Royal Regiment of Fusiliers, to take the salute. At this point in the proceedings, Ron, the Parade Commander, orders the soldiers and civilians to stand to attention and to then stand at ease, before finally dismissing the gathering.

If you have never attended, then I would recommend that you make a note in your diaries for 2023. It is an incredibly moving event and shows the non-Jewish world that our women and men, who served in every branch of the services, and who gave their lives to defend Britain are honoured and remembered.